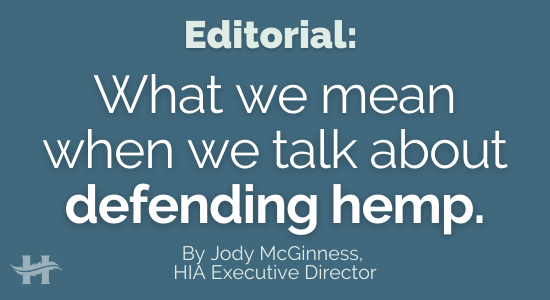 Editorial – What We Mean When We Talk About Defending Hemp

Opinion: What we mean when we talk about defending hemp.

The Hemp Industries Association recently issued a statement of support for all parts of the hemp plant, including delta-8 THC, that laid out the HIA’s positions:

The full statement and a cited legal opinion by Rod Kight and Philip Snow of Kight Law say a good deal more — including calling on businesses to adopt the highest level of safety, labeling, and marketing practices — but those are the three main points.

While we have since received supportive feedback from those who appreciate the HIA’s nuanced stance, we have also seen some confusion about the statement. Some of this is to be expected, when complicated legal and scientific matters are at issue. Concerningly, however, some of this confusion relates to what the statement said about federal legality. Because hemp businesses, farmers, advocates, and consumers have relied upon the HIA for nearly 30 years for accurate hemp policy information, and because educating the market is at the heart of our nonprofit mission, we think it is incumbent on us to clarify the following point: any reference to the legal status of hemp-derived cannabinoids in our press release was limited to the Controlled Substances Act.

While the 2018 Farm Bill did make hemp (including all its derivatives, cannabinoids, isomers, acids, salts, etc.) no longer a controlled substance, other federal regulatory issues must be resolved to enable the interstate commercial exchange of all hemp goods. (Consumable products must be explicitly legalized under the Food Drug &Cosmetic Act, for instance). Any assessment of the legality of a substance, or the business decision to product such substances commercially, should be made in consultation with qualified legal counsel, as the shifting patchwork of state and national regulations creates unique hazards for hemp enterprises.

The HIA predates CBD and hemp legalization by over 20 years, so it is perhaps no surprise that many people aren’t aware of the relevant history, but the reality is that the Drug Enforcement Administration has a long track record of bullying the hemp industry by repeatedly attempting to bypass the process for scheduling a controlled substance when it comes to hemp products.

The clear fact is that no other national industry has been subject to the level of DEA interference that the hemp industry has endured for decades. Those who have been a part of this industry long enough to have witnessed the product confiscations, selective enforcement, and seized shipments understand that the real-world impacts of the DEA’s “authority” over hemp always end up being harmful to businesses, farmers, and consumers alike.

The HIA believes that we should never stop working to create the hemp industry we want, but we also need to contend with the hemp industry as it really is. And the reality is that, while they have issued an interim rule and made statements relating to the subject, the DEA has not scheduled any hemp cannabinoids.

We contend that, because hemp (including all cannabinoids, extracts and derivatives therefrom) was expressly excluded from CSA control by the 2018 Farm Bill, any attempt to return any hemp cannabinoids to federally controlled status must lawfully follow the scheduling process. Anything less than the scientific evidence, industry input, and public comment required by the federal scheduling procedure would be short-changing hemp.

Thanks to the dedication and persistence of countless activists and allies, hemp was removed from the CSA and (mostly) liberated from the obstacles and hazards that came with Schedule 1 status by the 2018 Farm Bill. The Hemp Industries Association is determined to do all we can to maintain that freedom and will continue to fight, supported by engaged and knowledgeable industry leaders, for the full potential of the whole hemp plant.

So, when we say we stands for all parts of the hemp plant – including delta-8 THC, that is what we mean. By standing up for all hemp products, we are standing up for the principle that hemp deserves to be regulated like the agricultural resource that it is, exactly as the 2018 Farm Bill stipulated.

To be considered for publication as a guest columnist, please submit your request to editorial@hempindustrydaily.com with the subject line “Guest Column.”